Relocations and In Take

Our Cats after Release

Relocations and In Take: Placed 11 this week.

Our Cats after Release:

We put some cats at a ranch in Frost, TX in the spring. She sent pictures the other day. These cats came from Commerce, TX I think. There was also a torti but no picture of her. 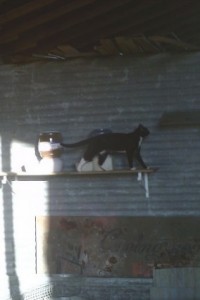 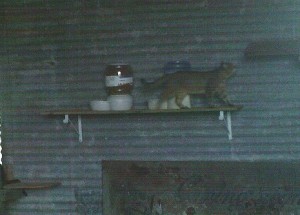 There are a bunch of cats living in a storm drain in a community in the southern end of the Metroplex – bet there are lots of storm drains with cats around Dallas/Fort Worth! The cats have been there long enough to have kittens several times. How the caller wants to get them out of there – all the kittens have died! I just hate these calls. She can get the vet work done for free somewhere but has just never done it. I told her (like I tell everyone this time of year), I can help you in September but not now. Get them sterilized and STOP THE BREEDING, continue to feed them, and I can take them in September. Wonder if she will do it….???

We drove the new Chisholm Trail Parkway down to the Cleburne area. When I took the exit, there was a white truck on the far side of the toll road which is 6 lanes at that point. I made the right hand turn and continued west. When I looked in my mirror, all I could see was the grill work on that white truck. Well, he took the phone number off our truck and left a nasty message. “We need to learn to drive. You cut me off. If I had been an 18-wheeler, you would be dead now.” I know it was him by the time stamp on the message when I got home. He called later that night – up close and personal – to let me know he was still pissed. You know – he needs some anger manager classes or something. He was not even close when I made that turn AND there were other cars in front of me. GO FIGURE!

From last week:  Poof, Pumpkin, Dana, and Jimmy were placed in this barn in Graham. Only Jimmy is making himself seen currently but I would be willing to bet the other 3 are still around. We shall see…

UPDATE: The barn owner put out a game camera and YES all three that she has not seen are still around. This is Poof, Pumpkin, and Dana. She is seeing Jimmy. BEST NEWS EVER! (love the butt shots) 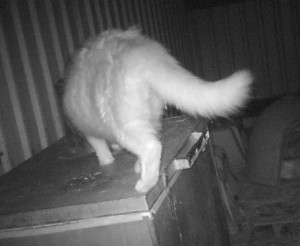 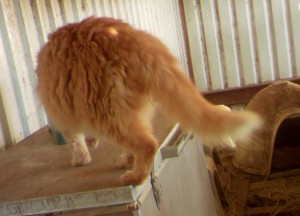 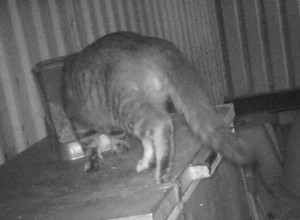 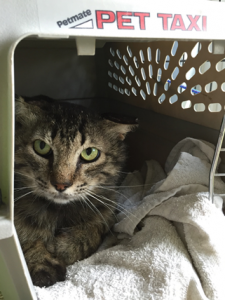 The color picture is of Jimmy when at Barn Cats.

I have been trying to purchase a new Ford Transit Connect since July 4th. It has been one thing after another with the “fleet” department. Finally a regular sales person took over and we got the deal done. I left our first transit connect at the dealership on Friday. I miss it!   But we will get the new one next week after some adjustments are made. Then we will need to get it wrapped…another struggle! This is the first TC! 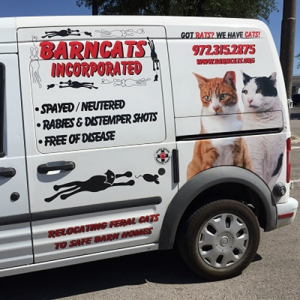 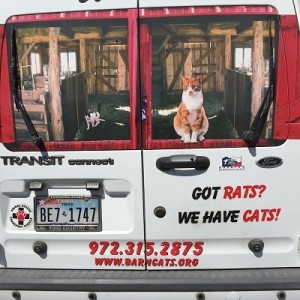 Thanks for following the Barn Cats Blog. See you all next week.     Peg 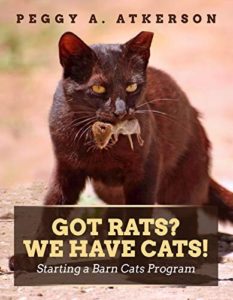 As rescuers we want to save every animal life, but nobody wants to risk injury often associated with helping feral cats. Don’t blame the ferals; they’re fighting for their lives. They think rescuers want to eat them. As a consequence of their well-deserved reputation for ferocity, the feral cat euthanasia rate at shelters is almost 100 percent.